In early January 2008, I took this photo of the sculpture titled "Social Consciousness" by Jacob Epstein (1954). It's located at the back entrance of the Philadelphia Museum of Art. Many times I have seen this sculpture in shadow so the full impact of the piece did not strike me until I photographed it on a clear day in late afternoon approaching the "golden hour".

Recently I went back to the raw photo file and with Lightroom and Photoshop, did some post-processing work on it. To make the sculpture photo stronger and really see the piece with all its strength and emotion, I removed the background clutter. Photography is a subtractive art form.

For more information about the sculpture see http://www.philart.net/art/Social_Consciousness/353.html

Not everyone likes this sculpture
see http://www.phillymag.com/news/2015/07/02/the-12-worst-pieces-of-public-art-in-philly/

I wrote some experimental Processing code as an Android app (for Samsung Galaxy S6 phone) to see if synchronized shutter release could be achieved using Telnet into twin Samsung NX500 cameras modified with the  NX-KS2 hack.

Unfortunately no, the system delays do not allow synchronization within 1/100 second. I'll have to stick with wired controllers for shutter release. There may be a way using Broadcast messages if I can write a daemon for the NX500 to trigger the shutter when it receives a message.

This code may be a helpful starting point for other purposes when accessing the camera with Telnet. You can get the code on Github at


It's a 3D photographers lament that no major camera manufacturer sells a quality stereo 3D camera. Apparently the market for these cameras is not big enough to support development.  All the consumer's money for cameras is going into mobile phones, the consumers's computer choice of today.

If you want to take stereo photos, you have to build your own 3D camera. Manufacturers do not seem to even design cameras with the idea of pairing them for 3D imaging. With Virtual Reality becoming popular there may be more incentive to design for multiple cameras. We will see.

With my desire for better quality images from the camera, I decided to build a new rig. My latest 3D Twin Camera Rig uses the Samsung NX500 camera. Unfortunately Samsung discontinued its camera line, but due to this unfortunate decision, the price was more affordable (for a while) given the features the camera provides. But if this camera ever becomes more popular, due to its scarcity, I think the price may actually go up. Read below about camera mods that may affect this trend.

The NX500 is a smaller version of Samsung's top NX1 camera that uses the same APS-C sensor. It's an excellent camera that meets most of the guidelines I set for deciding which camera to buy to upgrade from my Olympus E-PM2 twin 3D rig. It's not a perfect 3D rig, but the photo quality of the NX500 is so much better than the Olympus E-PM2 camera that I am using now. I have to abandon the M4/3 mirrorless cameras for the better image quality of larger APS-C sensors available with the NX500. The only reason the NX500 is not ideal is that Samsung chose to put the shutter release port on the side where you would join the cameras in a Z-bar configuration to get the smallest possible inter-axial distance in landscape orientation. This camera design shortcoming makes it necessary to build special right angle USB plugs connected to shutter release cables to minimize the camera separation (a future project). Another possibility is to use WiFi remote shutter triggers, so wired cabling issues go away, but that is a future project.

After buying the cameras I discovered Samsung had open sourced the software. And there is an active group of enthusiasts - NXKS2, who have extended the features of the camera. For more information see the facebook page
https://www.facebook.com/NXKS2/
and to download the latest mod use:
http://authors-vault.com/NX-KS2.zip

Now with the NX500 mods I can use a number of features not originally available, such as truly silent shutter, remote control, focus stacking, etc. Also I can use FTP (file transfer protocol) into the camera's FTP server using WiFi and my local network. The FTP is especially nice to download photos without taking the cameras off the 3D rig support, which is cumbersome with my rig support. And there is also Telnet protocol to experiment with the camera features with a terminal. There is more technical detail about the modifications (may not be up to date) at:

Wow! What a bonus to have all these unexpected camera features. This is a great camera system for hacking! What a delight for a photographer/developer like me. Thanks Guys!

My intent is to use the NX500 rig for studio projects with off camera strobe flashes (portrait orientation) and continue to use my E-PM2 rig for natural light events and touring (landscape orientation). With the NX500 kit lens, 16 mm - 50 mm zoom, the 35 mm equivalent is 24 to 75 mm, versus my E-PM2 14 mm fixed lens (28 mm equivalent). With the E-PM2 I always shoot raw and post process with Lightroom to get the best possible image. It's a necessity, especially to eliminate noise and best match the photo exposure and color of the cameras. With the NX500 it appears I do not need to use Lightroom as much although it can handle Samsung raw files.

With the NX500 cameras mounted in portrait mode, the inter-axial camera lens distance is 80 mm. This distance is fixed in the support I built. The support is made from two 3/4 inch wide sandwiched aluminum channels and a sanding handle. The camera shutter trigger uses a common diode OR circuit and the flash trigger was borrowed from the E-PM2 rig. It uses a 3 volt Arduino microcomputer to detect and sync the flash triggers into a PocketWizard wireless flash trigger. I'll probably be making refinements to the cabling, controllers, and building a landscape mode 3D printed camera support in the future. I think with a Z-bar configuration for a landscape orientation,  I may achieve an inter-axial lens distance of 95 mm.

The minimum inter-axial camera lens distance for my E-PM2 rig is 95 mm. This distance can be increased to 170 mm for hyper-stereo photos and has worked well for more distant subjects. But for studio projects the subject distance is usually closer and I use the portrait orientation often, that's the rationale for mounting the NX500 in portrait orientation. For comparison, note that the FujiFilm W3 3D camera has a fixed interaxial distance of 75 mm versus 80 mm for the NX500 rig.

I find the fastest usable camera synchronization shutter speed is 1/100 sec for the NX500 and 1/125 for the Olympus E-PM2. Any faster than these speeds will often cause one the cameras to miss the flash. To photograph subjects moving faster than 1/100 will capture, I resort to lower power portable strobes, 1/8 power, to get a short flash duration (.5 millisecond) and thus capture moving subjects in very low ambient light. However, there are full high power studio strobes with very short flash duration times, but I don't own these expensive strobes. I have shot 3D in a professional studio with these flash units and the results were super. 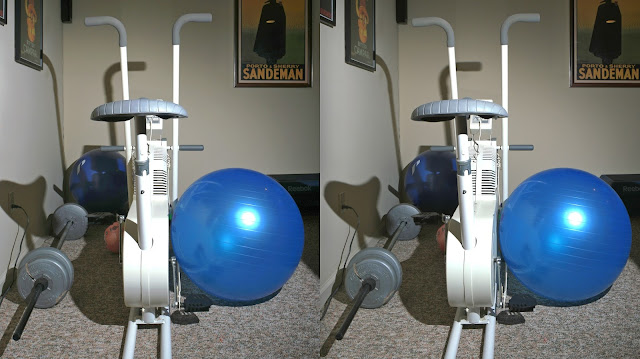