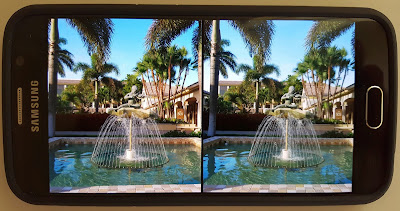 When you view 3D stereo photos (parallel, side-by-side, MPO formats) on your phone with my Google Play Store Android 3D/VR stereo photo viewer app, you would normally use a stereoscope or Cardboard viewer.

You don't need a stereoscope or Cardboard viewer after all, instead you can use the "free viewing" technique.

My Samsung Galaxy S6 phone has a horizontal display width that approximates the width of my glasses. Because my phone display width is about 4.5 inches, and the center to center distance between the left and right eye images on the phone nearly matches the distance between my eyes, I can free view 3D parallel side-by-side photos and actually see them in stereo.

Maybe this works for me because I'm near sighted. With my glasses off I place the phone very close to my eyes, relax my eye focus beyond the phone, and then very slowly back away the phone, until the photo comes in focus and I see a 3D image. This is the same technique used to view stereograms, as found in the "Magic Eye" book series, which are multiple volumes of 3D illusions. Stereo photos are easier to free view than stereograms in my opinion.

When I use the 3D/VR stereo photo app, in VR mode, while free viewing, I can zoom into the photo and pan left and right to see other areas of the image close up. In the Settings menu I turn off Lens Distortion Correction because I'm not using Cardboard VR lenses. This option makes the photo distortion free in VR mode.

I sometimes also use a Bluetooth connected mouse to move the photo around and zoom into the photo. The TeckNet BM307 Wireless Mouse works great. When I use the mouse I don't have to tilt the phone to zoom in. Tilting the phone makes it harder for me to maintain my 3D vision when free viewing. Also the app Settings allow you to turn off the head movement option, but still use a mouse or other Bluetooth controller to move the photo and zoom in.

Another improvement on free viewing I found is to wear a pair of reading glasses bought from a pharmacy/drug store. With the reading glasses I can get closer to the phone and see a bigger image. I use +3.75 magnification to see a photo in focus less than 5 inches from the phone screen. If you are far-sighted you will probably need reading glasses to view the phone at a close distance.

And iPhone owners, you can use the free view technique with side-by-side photos too. You don't need a viewer app, although an app helps if you want to zoom into a photo. Expanding a photo with your finger to magnify a photo will not show the photo correctly in 3D stereo.

If you want to learn more about how to free view check out this link
http://www.angelfire.com/ca/erker/freeview.html
Or do a Google search for "how to free view (3D) images".

Of course DO NOT free view or use a viewing app and stereoscope combination, if this gives you eye strain or eye discomfort.

As people get older some may loose their ability to see in 3D and have poor depth perception, making driving difficult. This is because the brain controls stereoscopic vision not the eyes. I wonder if stereoscopic vision is a learned experience from birth and whether it can be relearned when it diminishes or the ability was lost or never learned.

Since posting this blog I read a book by Susan Barry, "Fixing My Gaze" in which she explains how she learned to see in 3D stereo after middle age.


If you would like to experiment with Stereogram creation using the Processing language and development environment (SDK), I uploaded the code on github for you. I converted the code from open source Java desktop to Processing sketches. The example stereogram above was created with the Processing code using a flower photo I made. 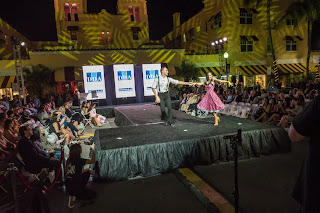 Last week Delray Beach, Florida hosted #DelrayFashionWeek with proceeds benefiting the Delray Beach Achievement Centers for Children & Families. I went to the opening public fashion show in downtown Delray Beach with my 3D camera rig to photograph the runway action. My goal was to try out the WiFi Remote Capture app for shutter trigger of the twin Samsung NX500 cameras.

Using the WiFi trigger, the cameras did not perform well with many poorly synchronized 3D photos or missed photos from either or both cameras. See my analysis below.

Each camera has a 16 mm fixed focal lens (24 mm equivalent to 35mm full frame camera) with manual settings at 1/80 sec, F4, ISO 1600. The inter-axial spacing between the cameras was increased from the minimum of 86 mm possible with the rig to about 120 mm to get a better 3D hyper-stereo effect given how far away the subjects were from the camera. Photos were shot in raw, post processed using Lightroom, and aligned for 3D stereo with Stereo Photo Maker.

The 3D camera rig was attached to a very light weight tripod and I was able at times, to lift it high above all the official event photographers in front of me, and keep the foreground clutter out of the shot. Here the remote bluetooth/WiFi combination was useful. In retrospect, I should have used a long shutter cable or PocketWizard remote triggers.

With 24 mm equivalent lens I was able to capture the entire view of the models, stage, and audience. The show floodlights lit the scene well from my vantage point at the end of the runway, so a flash was not necessary.

The public show space had a large crowd (guessing 300+) watching in a multi-retail store business location (with WiFi networks) and everyone had their phone out taking pictures, emailing photos, or what ever. So I think there was a lot of interference from WiFi signals and Bluetooth. I was thinking the cameras and phone where close enough to override any interference, but I misjudged the outcome based on home tests. 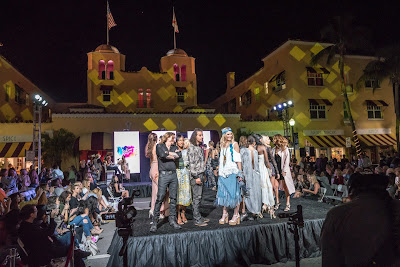 It seems my Sony Z1s phone WiFi hot-spot defaults to the 2.4 GHz channel 1 band. I should have changed this channel setting. Going back the next day with a phone WiFi analyzer, I saw at least 6 strong WiFi signals on channel 1 at my shooting location. Plus there were many more strong signals on other channels. I would recommend a strong signal portable router if its available instead of using a phone.

I also discovered a major problem in that the NX500 camera is slow responding to shutter close requests when triggered with WiFi, because a delay occurs when the camera saves files on the SD card and the camera does not immediately process network shutter trigger requests. This problem does not occur with wired remote triggers. With fast moving models it was not possible to consistently capture the best photo moment. For rapid shooting with twin cameras I would recommend a wired remote shutter release instead of using a WiFi trigger to capture your photo subjects.

WiFi control of multiple cameras can have advantages in some situations, where you can take your time shooting, but not for public 😢fashion shows, where camera wired remote shutter releases should work better with consistency. And unfortunately the NX500 cannot take a lot of shots rapidly, a camera feature needed for this kind of event.

I enjoyed writing the code for the Remote Capture app and learned some new techniques, so all was not lost, it was worth the effort. Maybe you will find the app useful for your photo projects. Please let me know how it works out for you, thanks!