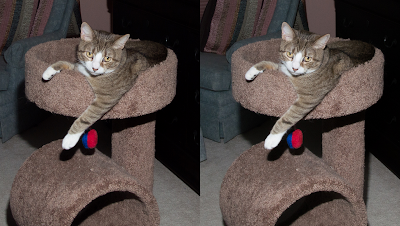 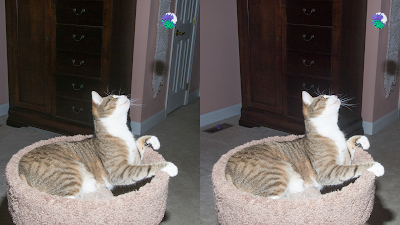 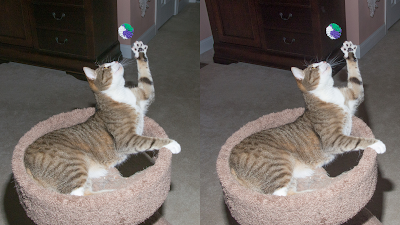 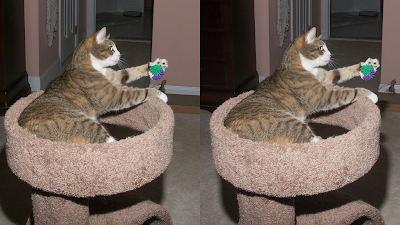 I have been busy improving my 3D Stereo Photo Viewer app for Android. One new feature I added works directly with my blog site. If you are viewing this page with an Android phone in the Chrome browser, then all of the photos embedded in this Web page can be seen using the viewer by clicking on the link here to launch the app:


And 2D photos can be viewed too. 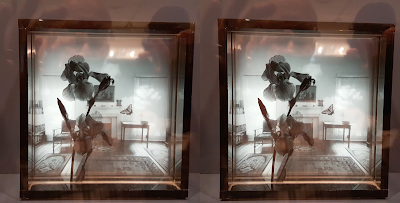 Currently the Philadelphia Museum of Art has an exhibit from its own collection of photos in the Honickman Gallery. Upon entering the gallery there is a unique 3D photo collage (three layers of photos sandwiched between acrylic sheets). Unfortunately I did not note the photographer or name of the art work when I took this 3D cha-cha photos. I will have to remedy this omission on my next visit.

I took these photos to give you readers a better idea what the 3D photo collage art looks like if  you can't visit the museum. 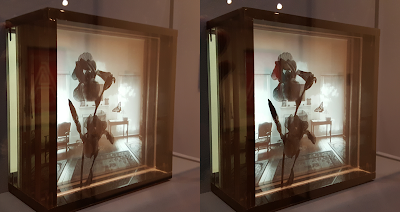 
If you are viewing this page in an Android browser (Chrome) click this link to launch my 3D Stereo Photo Viewer app and see all the embedded photos.


Here is the same photo before alignment or cropping. I used a 3x3 grid overlay with Open Camera so I could see the main subject offset relative to the grid marker for best 3D effect. Even without alignment, I thought the 3D photo was pleasing to look at because it was not too badly misaligned when shot.

My last blog posting about the cha-cha technique was
http://andymodlaphotography.blogspot.com/2011/12/3d-cha-cha.html


Here is a suggestion I sent to Samsung today.

I bought a Galaxy S6 phone and Gear VR headset last year, and  I enjoy using these devices. One addition hardware feature I would like to have in a future phone is a second primary camera, spaced horizontally 65 mm from the first with the flash between the two lenses. With this enhanced phone and the Gear VR, I could capture true 3D photos and videos and have a way to view them easily with the Gear VR HMD. Plus with the cameras it opens up possibilities for new AR apps too. This feature seems like the missing piece to the puzzle of getting more out of my phone. Thank you. 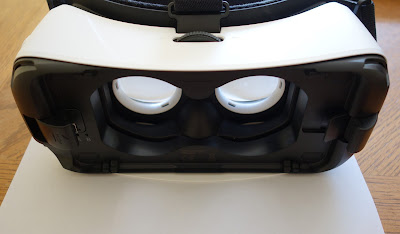 Adding another camera may present problems with space, the phone might have to be thicker. And a faster or dual graphics processor will be needed for AR/VR with two cameras. 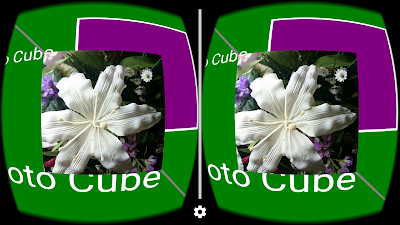 It is available on Github:

With Android Studio you can write Processing/Java code (includes Google Cardboard SDK libraries) to build Android 3D/VR apps for your phone. The above photo is a screenshot from a test app in the code repository on Github showing the viewer lens distortion correction feature.

I also fixed a problem displaying line and text (among others graphics) where the left image was written to the right eye viewport. I determined this only occurred when invoking beginShape()...endShape(), but not createShape().  I got a clue about how to fix this in a Processing Forum at