A large group of street painting artists, working with ephemeral chalk, gathered in Lake Worth, Florida, February 25-26, to draw their paintings on the pavement during the Lake Worth Street Painting Festival. We went mid-day Sunday and many works were not yet finished. It was an amazing show of street art stretching for blocks and blocks of Lake Worth. My goal as a 3D photographer was mainly to show the artists at work, the spectators, but not always the completed painting.

I especially like photo above because the sun highlighted the partially finished work, while showing the artist's work-in-progress and inspiration source material in contrast. It may look flat in 2D, but I think it looks good in 3D because the depth perception further defines and contrasts the artist, chalk materials, drawing method, shading umbrella, and art work.

To capture these photos, I used twin Samsung NX500 cameras with Samsung 16 mm prime lenses and circular polarized filters (24 mm equivalent to 35 mm full frame cameras). Several people asked me about the camera rig. It uses a wired shutter release and each camera was set to F8, 1/160 with variable auto ISO.

Lunch atop a Skyscraper

Tracy Lee Stum, from California, autographed her book "The Art of Chalk" for me. She painted the 3D anamorphic chalk art of the ironworkers on the beam above.

I wonder if the above 3D photo of 3D anamorphic art looks more realistic when viewed stereoscopic? With Stereo Photo Maker I adjusted the stereo window to center on the spider's head (middle ground with zero parallax). This helped make the spider's web appear over the opening. 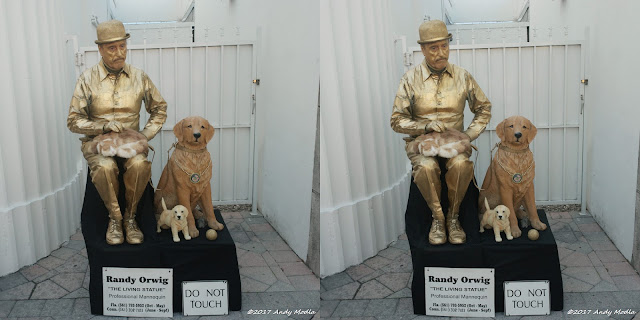 More 3D photos from the festival are here:

On your Android phone copy this link above into the clipboard and view 3D photos with my 3D/VR Stereo Photo Viewer app in your Google Cardboard VR headset.