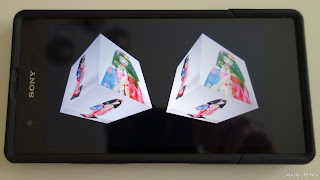 Here's a screen display for an Android app I wrote in the Processing language/library framework. It displays a photo cube. When viewed with a Google Cardboard VR viewer (as a stereoscope), the cube will appear in 3D and since one photo is a left and right stereo pair, that photo will appear in 3D in the cube. The cube can be rotated using the arrow keys with a bluetooth keyboard connected to the phone or by dragging your finger across the screen.

You can try this yourself with code I posted on GitHub at:
https://github.com/ajavamind/processing-android/tree/master/AndroidStereoMultiTextureCube

The stereo display framework code is based on work done at:
https://github.com/CreativeCodingLab/stereo

I simplified the Stereo.java library code to only use Processing P3D/OPENGL library calls. I did this because I could not get the CreativeCodingLab implementation to work as written with the OpenGL ES libraries that were needed to build. It turned out Processing-Android P3D/OPENGL has everything I need, for this project at least.