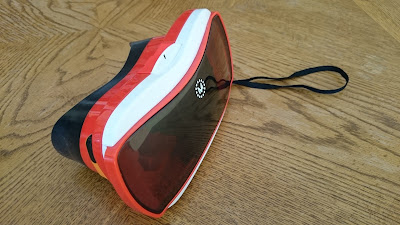 I have been eagerly awaiting the in-store arrival of the new Mattel View-Master VR (virtual reality) Viewer and it is now available for purchase from my local Target store. Here's a photo of the Mattel View-Master VR Viewer I bought a few days ago. My goal was to see if Cardboard VR apps I'm writing, need to be modified for use with this viewer. Second I wanted to see how Mattel's app's user interface works.

The viewer's operational design is based on Google Cardboard version 2. With this version you pull a lever to tap the screen for controlling VR apps that run on your smartphone mounted in the headset. The first version of Cardboard used a magnet "lever" which did not work with all phones.

I found the viewer to be solidly made and it held my phone securely. The rubberized head cup is very comfortable. There is a wrist strap but no head mounting strap, so you need two hands to operate it safely to avoid accidentally dropping the viewer. Mattel's VR viewer costs about 3 times as much as a cardboard headset, but it is worth it. One problem I had with the viewer was the lever's touch pad point often failed to retract to its home position after striking the screen, unless I quickly snapped the lever. I exchanged this viewer with Target and the replacement unit works fine. I  use a bluetooth controller/keyboard with most of my Cardboard apps making the lever less important for my apps. 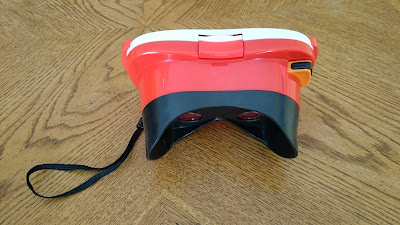 I noticed the phone display is blurry when I wear my bi-focal glasses for normal vision. There is no adjustment possible for changing the viewing distance from the lens to the phone screen nor the lens separation distance to match different people. With my glasses off the screen is in sharp focus.  I have read at least one report that some people have problems with a blurry screen and they decided to return their unit. When I used the viewer all day to view my stereo 3D photos I shot, I got eyestrain. This could be a problem with my 3D photos not all being optimized for a comfortable viewing experience or the length of time I spent with the viewer (all day).

Mattel's VR viewer presents an immersive experience since you cannot see any sidewalls of the viewer's interior. You need to turn your head to see everything. The narrow field of view made watching my 3D stereo photos only partially visible, since not all of the photo was visible. This is an issue with an app I wrote to view my photos. 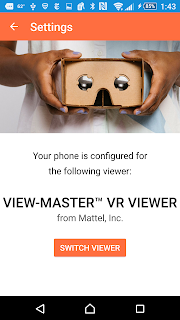 The viewer includes a Starter Pack disk that allows access to three sample VR apps.  My phone is an Sony Xperia Z1S (screen 1920x1080 pixels) which is not one of the supported phones for the View-Master VR as currently published by Mattel. I had a lot of trouble launching (getting the floating augmented reality image to appear in the camera view)  the three sample VR apps (Destinations, Space, and Wildlife) from Mattel. I have a hunch the issue is with my phone camera, since I was not able to easily launch Mattel's apps VR presentation consistently. It took too much time fiddling.

UPDATE 2015/10/20:
When I removed the View-Master's plastic cover over the lens of my phone's camera, I was able to launch the sample VR apps without any problems. 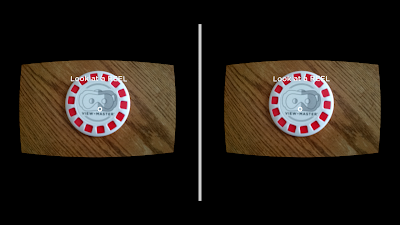 One annoying aspect trying to get the Mattel apps to launch with my Sony phone was a dreaded screen with the text "REMOVE DEVICE FROM HEADSET".  The only way I could bypass this screen was to fully exit the app and start all over, after removing my phone from the viewer. Sometimes I got this screen when the phone was not even in the viewer. 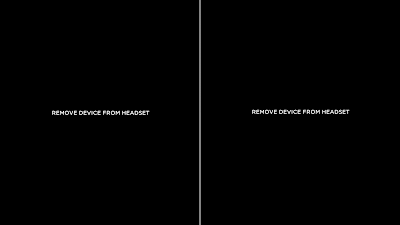 Once I was able to successfully launch one of the starter apps, with practice it was possible to navigate the various views and it was a worthwhile experience. The experience made me wish for a phone with a better higher resolution display. I liked the Space pack best. Not sure these apps are compelling enough to go back to try and launch again, given the difficulty launching the VR presentation with my Sony phone.


Note that phone controls like the volume buttons, camera shutter button, headphone jack, and USB port are not accessible once the phone is mounted in the viewer. Some hack modifications to the viewer I  am thinking about are to drill a hole to open an access hole to the USB port on the phone for app development. 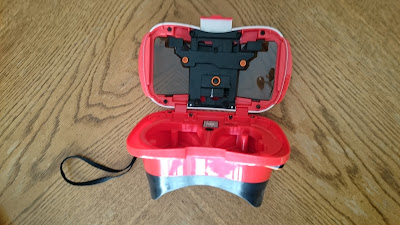 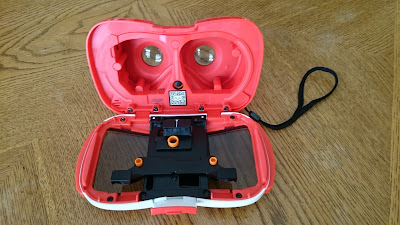