Photo of my cat jumping from the top of a refrigerator to the counter, taken with my twin camera stereo rig. To view side-by-side photos on screen I use a stereoscope purchased from Berezin Stereo Photography Products. 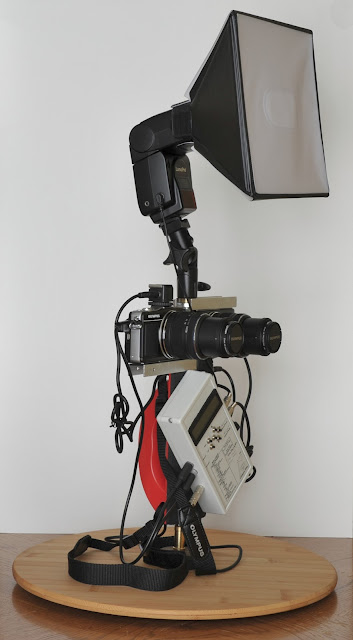 I made this twin Olympus E-PM2 camera rig for 3D photography. It's my third homemade rig, the first used twin Canon point and shoot SD800 cameras, and the second,  twin Nikon D80 cameras. For this rig I chose the Olympus E-PM2 camera because I wanted a small lighter weight camera with good image quality.  My goal was a camera system that could be used for action shots. The SD800 was not good for action and the Nikon D80s are too heavy to hold and very difficult to adjust on the run. The twin D80s required a tripod to use effectively.  I also have a 3D FujiFilm W3, but it is not suited for action shots and the image quality is not great.

The harness was built on a 12 inch long, 1/4-20 inch diameter screw shaft mounted in a large red sanding handle. The left camera is mounted upside down to get the smallest distance possible between the lenses, about 110 mm.  This is wider than the W3 at 75 mm, human eyes at 65 mm, and smaller than the twin D80 mount at 170 mm. (The D80s had to be mounted right-side up for the shortest distance between the lenses.) I made two support bars to hold the E-PM2 cameras and fastened with 1/4-20 inch nuts to the long screw.

The LumoPro LP160  quad sync flash mounts on an umbrella swivel. I use a LumiQuest Softbox III for softer light diffusion. The flash is manually set for zoom and light level output. This flash system is a big improvement over the built-in flash in the FujiFilm W3.

The whole rig can be placed on a monopole making it easier to carry and use. Without the monopole the rig + flash weighs about 5 lbs (2.3 kg). This is heavy to hold in one hand.

I think the Olympus E-PM2 is the easiest camera to use in twin mode for 3D than the other home-made camera rigs I built.  I am able to set the focus point for my subject in each camera by touching the same point on the LED display for the E-PM2 cameras. With the D80 I had to look through the viewfinder of each camera, focus, and then change to manual mode to keep the focus. When I press the shutter release button half way to set the camera focus, both E-PM2 cameras focus on the prior selected subject point. Also the E-PM2 has an option to show the live display upside down when the camera is upside down in its harness. This makes it easy to compose the shot. A disadvantage of the E-PM2 is that the menu system keeps its orientation when the camera is upside down, while the view looks right side up. This makes it harder to change parameters for the shot.

The camera flash sync time difference is in a range of .4 to 6 ms.,  most often around 1.5 ms. The controller calculates this time and displays it after taking a photo and shows which camera triggered first. When my shutter speed is set at 200 one camera may be too late for the flash, while at 100, I get better results more often, despite delays between camera shutter openings.

My LumoPro LP160 flash has a flash duration of 1/450 sec at full power and 1/2250 sec at quarter power. See LumoPro web site. Since the shutter openings are not in sync, the flash time will determine how well I capture moving objects. Here is an informative web page on this topic.

My controller triggers the cameras at the same time without accounting for each camera's shutter delay. This is not predictable, but I suppose I could add code to delay the first by an average sync delay time to improve the system on average based on which camera is faster.