The single camera cha-cha method for creating 3D photos can be generalized to use any moving camera platform. The platform could be a car, boat, plane, train, bicycle, etc. Depending on the distance covered between left and right image capture (the stereo base), you can make either hyper or hypo stereo photos. Hyper stereo photos result when the camera spacing is greater than the human eyes, and hypo stereo photos uses camera spacing less than the human eyes separation distance.

I found a good presentation by George Themelis - NSA (National Stereo Association)  July 2010, http://www.drt3d.com/W04-HyperHypo.pdf about hyper/hypo stereo using the 3D Fuji W3 camera. He lists the pros and cons of single camera stereo, as well as general concerns encountered using a moving platform. You can use any camera to create 3D photos, although the article discusses use of the W3 features. 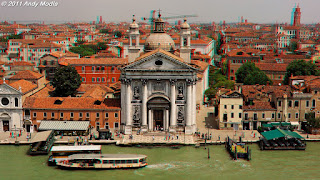 Here is an example of hyper stereo image taken in 2009 from a cruise ship in Venice. I used a tripod and was actually trying to create a HDR (high dynamic range) image with 5 bracketed exposures, and I used adjacent shots to create this 3D photo by adjusting the exposures of the left and right images to match. 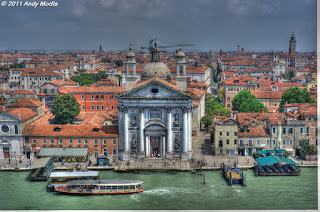 Here is the HDR photo of the same scene as originally intended, processed with Photomatix.